Exciting times at Ganako Primary in Karatu where the staff of the Manor Ngorongoro finally completed their work on the school playground. Using items donated by Elewana – steel bars, wood and even an old Landrover body – the playground was designed and largely constructed by young interns from the Watoto Foundation, skilled workers supporting their community. Once the main structures were up, staff from the Manor including housekeepers, kitchen staff, bar staff and maintenance staff went to work and painted the whole thing in bright colours. Saplings were transplanted from the Manor grounds, and hedges and shade trees put in around the playground site. 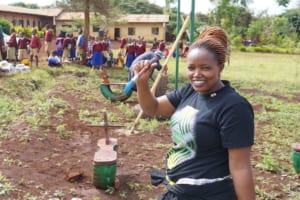 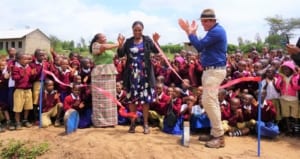 On Tuesday 22nd January, Hannah from Land & Life met Martin the GM of the Manor at the school. They were welcomed by Mr Lembris the Headmaster and the students and teaching staff. Also joining them was Jacqueline, representing the District Commissioners Office of Karatu. After a few words, Jacqueline and Martin cut the ribbon, and the children were let loose in the playground for the first time! The Landroover slide proved hugely popular as did the little rocking horses, which the children chose to use as motorbikes with a lot of vroom vroom noises!

Land & Life also made some presentations at the school – three students who had written wonderful essays about the importance of protecting the environment received branded Land & Life school bags, and  the school also received two boxes of books, toys and posters which were donated by families and friends of Elewana and Sopa Head Offices. In a final wonderful coincidence, both Hannah and Martin had arrived with 550 lollipops – so each child in the school got to have two each! 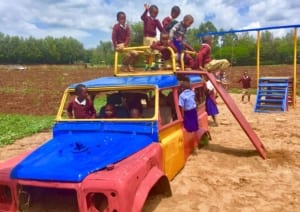